By MATT WILLIAMS
The Daily Sentinel
Wednesday, May 20, 2009

LAKE BACCARAC, MEXICO – I don’t mean to brag, but this place has been awfully good to me lately. In three days fishing I have reeled in more lunker largemouths than most anglers will hook in a lifetime. It is not a wonder that Lake Baccarac is heralded by many as the best trophy bass lake in the world.

Perhaps Gil Wright summarized it best as we drifted across an underwater point as the sun began to set over the rugged Sierra Madre mountain range last Sunday afternoon. Tim Boatman of Nacogdoches and I had just caught and released a pair of beauties that weighed 11.8 and 12.1 pounds, respectfully. Wright, a well-heeled home builder from Oklahoma City, Okla., was in the mood to celebrate.

Our crew prepares to board the Westwind charter flight out of El Paso. The plane lands in Bacubirito, roughly 15 minutes from Lake Baccarac Lodge.

Tim Boatman of Nacogdoches displays an 11.8 pound largemouth that gobbled up his YUM Money Minnow on recent trip to Lake Baccarac in Sinaloa, Mexico.

Terry Hollan’s Lake Baccarac Lodge sits on a mountaintop overlooking what some are convinced is the best big bass lake in the world. 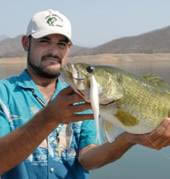 “That’s what it is all about,” Wright said. “You never know what will happen on this lake. One minute you might be catching nothing and the next you can hook the fish of a lifetime. That is the neat thing about Lake Baccarac. That next 10 pounder is always just a castaway. It is a pretty special place.”

Wright should know. He has visited Terry Hollan’s Lake Baccarac Lodge (lakebaccaraclodge.com) multiple times since 2005 and he has landed more than his share of heavyweights.

To date, Wright has cracked the double digits 30 times. His personal best stands at 13 1/2 pounds, but he feels certain he has hooked larger fish and lost them for one reason or another.

“I just keep waiting for somebody to crack 20 pounds,” Wright said. “They are out there — I know they are.”

Knowing what I know about the 30,000-acre impoundment located in the Mexican state of Sinaloa, I tend to agree.

Baccarac is a legendary reservoir steeped in big bass tradition dating all the way back to the 1980s. In 1993, the lake produced a 19.10 pounder that still ranks as the all-time Central America record, including Cuba.

The big-time high was cut short beginning in 1995, when a decade-long drought combined with irrigation demands drained the lake to 20 percent of its capacity and decimated the bass fishing potential. But the lake has since bounced back and is once again cranking out results that at times sound as if they are pulled straight out of a fairy tale book.

Baccarac has all the ingredients needed to grow bass of giant proportions. Scads of them.

Like most south-of-the-border mountain impoundments, Baccarac is a riverine lake that is super deep (300 feet at the deepest point), very clear and ultra fertile.

Flanked by steep banks and sheer canyon walls, the lake is chock full of Florida strain bass that flourish amid a jungle of brushy habitat that took hold when the lake was low. The fish also enjoy a year-round growing season thanks to the warm, Mexico climate.

Another key ingredient is forage. Think smorgasbord and you can get a good idea of what it is like down there.

In addition to threadfin shad, the lake supports a bountiful population of protein-rich tilapia. Commercial netters are allowed to target the succulent food fish at scheduled intervals, but head hunting largemouths feed on them seemingly at will.

When the latter happens at Lake Baccarac, things are prone to get bloody. Real bloody. Especially when the fish school on or near the surface.

The schooling phenomenon occurs when piscatorial predators drive groups of bait fish upward and pin them against the surface so they can feed on them more effectively. Schooling activity is fairly common on bass lakes across the South from late spring through fall. It normally involves roving bands of small bass, 1-2 pounders.

The schooling activity Boatman and I witnessed at Baccarac last week was anything but normal. On several occasions we saw small groups of giant bass weighing upwards of 10 pounds crash the surface within casting distance of the boat.